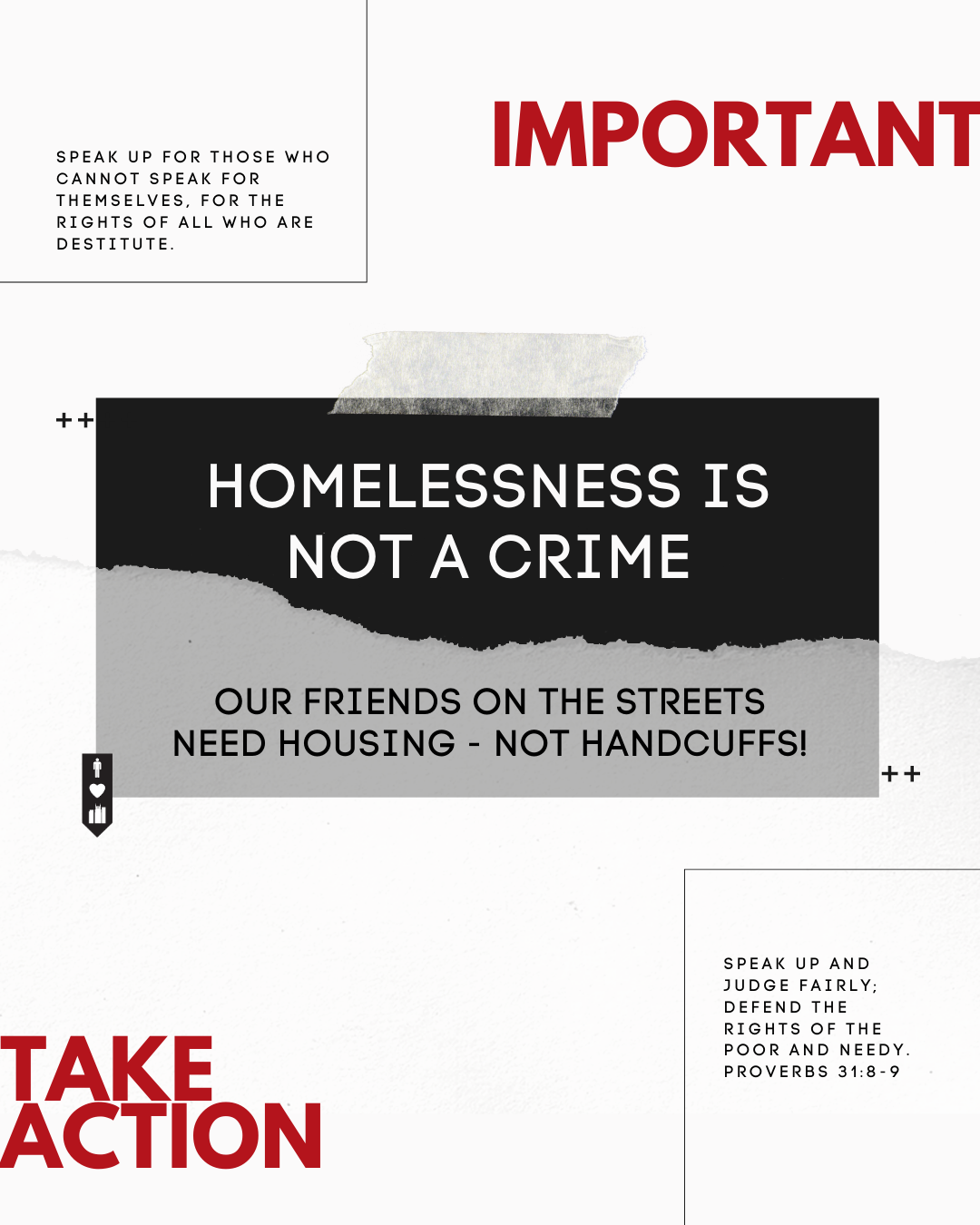 Our friends who use highways and corners and underpasses and public property—almost ALL of our friends—are being targeted by new legislation.

We are called to speak for those who cannot speak for themselves & right now is a time we need to raise our voices for our unhoused community.

Please take one minute to send the email below to let the state legislators know that homelessness is not a crime.
​We must email them before 2:00pm TODAY - Tuesday, April 13th.

"Speak up for those who cannot speak for themselves, for the rights of all who are destitute.
Speak up and judge fairly; defend the rights of the poor and needy."
Proverbs 31:8-9
​
​
We are joining with our friends at Open Table Nashville, who have been diligently monitoring a bill that would further criminalize homelessness across the state of TN.

This bill, HB0978/SB1610 would make solicitation or camping “on the shoulder, berm, or right-of-way of a state or interstate highway or under a bridge or overpass” a class C misdemeanor offense punishable by a $50 fine and community service work. It would also broaden the language within the Equal Access to Public Property Act of 2012 so that people could be prosecuted both on state *and* all public property.

The bill is sponsored by Rep. Ryan Williams (R-Cookeville) and Sen Paul Bailey (R-Sparta). Last year, the Mayor of Cookeville tried to pass a citywide anti-panhandling bill, but it was defeated by advocates who spoke out against the bill. Rep. Williams then took this effort to the state level and is claiming people in his community wanted this.

We need our elected officials to know that homelessness is not a crime and that our friends on the streets need housing - not handcuffs!
SAMPLE EMAIL:

I am urgently writing to you as a concerned Tennessee resident to vote NO on advancing Tennessee House Bill 0978 (HB0978) and corresponding Senate Bill 1610 (SB1610). This proposed bill will further criminalize Tennessee’s most impoverished and vulnerable citizens for merely existing in public spaces without addressing the root cause of homelessness - the lack of affordable housing.

Here are four reasons why you should vote NO:

1) Criminalizing homelessness is not only unjust, but also adds additional barriers that prevent people from obtaining housing and employment. Just last week, one of the men that Open Table Nashville, a homeless outreach nonprofit, is working with was denied from housing because of a trespassing charge on his record from two years ago. This bill will do nothing to truly help people who need social services, economic resources, and affordable housing. Handcuffs can’t heal.

2) Tennessee is in the midst of an affordable housing crisis, and instead of pouring energy into criminalizing people without housing, we need you, our lawmakers, to invest in creating more affordable housing and lowering the barriers to existing units of housing. According to the National Low Income Housing Coalition, nearly one third of all Tennessee renters qualify as Extremely Low Income, and there is currently a shortage of at least 126,597 affordable homes for this income group across the state. In addition to adding barriers HB0978/SB1610 encroaches on protections granted by the 9th Circuit Court in Martin vs. Boise by criminalizing involuntary homelessness.

3) HB0978/SB1610 is fiscally irresponsible when you consider that housing people who is experience chronic homelessness is less expensive than keeping them on the streets. According to multiple studies across the nation, an individual’s chronic homelessness can cost the public over $30,000 a year due to costs incurred through to use of emergency services and unnecessary and expensive interactions with our legal system. A housing-first approach would be both more fiscally responsible for the state of Tennessee and better for our communities by reducing the strain the experience of homelessness places on local hospitals, court rooms, and prisons.

4) In every major religion, there is a special concern for the poor and a mandate for people of faith and conscience to extend compassionate support. Deuteronomy 15:7-8 says, “If there is among you anyone in need, a member of your community in any of your towns within the land that the Lord your God is giving you, do not be hard-hearted or tight-fisted toward your needy neighbor. You should rather open your hand, willingly lending enough to meet the need, whatever it may be.” Isaiah 10:1-2a says, Woe to those who make unjust laws, to those who issue oppressive decrees, to deprive the poor of their rights and withhold justice from the oppressed of my people.” This week is Holy Week - the week leading up to Easter in the Christian tradition where Jesus himself was arrested and crucified by those in power. We are urging you as a leader of faith/conscience to do the right thing and care for the poor instead of criminalizing them.

For the above reasons and so much more, I ask you to vote NO on HB0978 and SB1610. I am asking that you vote on behalf of the thousands of unhoused Tennesseans who are also your deserving constituents. This bill will only further harm our neighbors without housing and make it even more difficult for them to obtain housing or employment (if they are not already employed, as we know the working homeless is one of the fastest growing subgroups of those experiencing homelessness). No one deserves to be without a home, and no one deserves to be criminalized for merely trying to survive. Tennesseans need housing, not handcuffs.

Sincerely,
(Your name)
(Your address)